The composition of New Caledonia’s coastal soils is characterised by a high lateritic content due to decades of laterite mining, laterites being valued for their concentration of trace metals such as nickel, chromium, cobalt and manganese.
Mangroves contribute significant quantities of organic matter and therefore constitute a key reservoir for dissolved organic matter (DOM), which can be transported over significant distances into the ocean.
Existing surveys raise the question of the role of mangroves as a sink/source in terms of trace metal dynamics at the land-sea interface downstream from New Caledonia’s mining massifs.
The TREMOR project thus aims to provide answers to this question, based on the fluorescence properties of a fraction of DOM known as fluorescent dissolved organic matter (FDOM), in order to:

•    provide a better understanding of the origin, sources and sinks of FDOM detected in New Caledonia’s rivers and lagoon;
•    assess the influence of this FDOM on the dispersal and toxicity of trace metals in the coastline environment downstream from New Caledonia’s mining sites.

The TREMOR project will use validation of spectrofluorimetric data (fluorescence excitation–emission matrix or EEM) through in situ measurements using optical techniques (absorbance and fluorescence).
Once validated, spectrofluorimetric data can be used to characterise the various constituents of the FDOM.
Samples will be taken along river continua - mangroves - lagoon area, i.e. along 3 transects in the Koné lagoon.
TREMOR project findings will therefore provide significant information in terms of characterisation of coloured fluorescent dissolved organic matter (DOM) and assessment of its complexation capacity as regards trace metals.
If these findings prove convincing, this inexpensive technique can be more generally used in other contexts, both in salt water and fresh water environments.

The composition of New Caledonia’s coastal soils is characterised by a high lateritic content due to decades of laterite mining, laterites being valued for their concentration of trace metals such as nickel, chromium, cobalt and manganese.

Due to the dispersal and potential toxicity of these trace metals, mining could have a permanent impact on coastal ecosystems and affect their biodiversity (pelagic and benthic macro and micro organisms).

Since mangroves are located at the land-sea interface, they may act as a filter between the mining massifs and coastal ecosystems, including New Caledonia's lagoon, a substantial part of which is listed as a UNESCO World Heritage Site.

Mangroves contribute significant quantities of organic matter and therefore constitute a key reservoir for dissolved organic matter (DOM) which can be transported over considerable distances into the ocean.

Due to this optical property, CDOM acts as a solar umbrella for tropical corals and means that satellite remote sensing (water colour) can be used for large-scale quantification.

The complexation of heavy metals with dissolved organic matter can facilitate their dispersal into the lagoon. However, following complexation, heavy metal trace elements are less easily assimilated by living organisms; this reduces bioaccumulation and can endow DOM with detoxifying properties in the lagoon area.

The TREMOR project aims to round out research work recently initiated by MIO in New Caledonia, with a thesis on the “Dynamics of coloured and fluorescent dissolved organic matter in tropical lagoon areas in the South Pacific - New Caledonia: climatic and anthropogenic influences” (Martias, 2018) dealing with FDOM in the waters of New Caledonia’s lagoon, as part of the INSU EC2CO TREMOLO  project  (2012-2015), and as part of the CNRT DYNAMINE project (2015-2018).

Characterisation of FDOM components in river waters and their fate in the lagoon will be of use in:
•    specifying the origin of FDOM and how it makes its way from massifs to lagoon, using PARAFAC - a tool for the decomposition of complex signals;
•    achieving a clearer understanding of the influence of bacterial degradation processes during transit and early diagenesis of FDOM;
•    assessing the complexing abilities of the various FDOM constituents as regards heavy metal trace elements, for a more accurate estimate of the respective contributions of FDOM constituents in the dispersal and toxicity of trace metals along New Caledonia’s coastline.

Samples studied as part of the TREMOR project will be taken along river continua - mangroves - lagoon area, i.e. along 3 transects in the Koné lagoon:
•    the first transect follows the Témala river which flows into Chasseloup Bay. This first transect is associated with low mining-related impacts;
•    the second transect follows the Coco river which flows into Vavouto Bay. This second transect is associated with high mining-related impacts, with the KNS industrial site as a potential additional contributory factor; 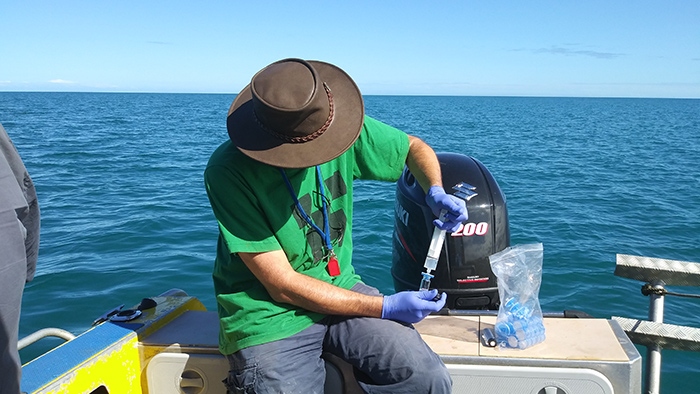 By comparison with these affected sites, the MOISE permanent observation station, located at Basse Caui opposite Maa Bay in the southwestern lagoon, has been regularly monitored by the IRD (monthly) for several years.

Other research sites can also be considered, including in connection with other projects funded by the CRESICA Au fil de l’eau Program (SEARSE project (Ifremer), for example).

The TREMOR project will have the advantage of a new-generation high sensitivity spectrofluorometer recently put into operation (October 2017) in New Caledonia (UMR IRD MIO). This instrument will perform analyses of FDOM and heavy metal trace element complexation experiments on fresh specimens (no preservation-related bias). 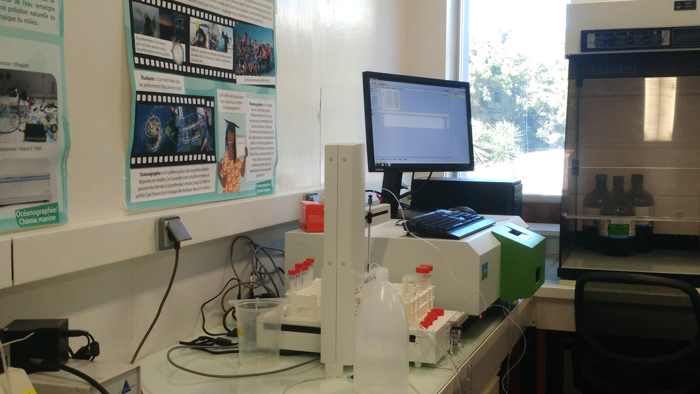 Furthermore, the recent commissioning of an ICP-MS device at LAMA (US IMAGO IRD) means that these spectrofluorimetric analyses can be locally coupled with analyses of heavy metal trace element concentrations in samples from waters under study.

Two factors will be taken into account during sampling campaigns.

• seasons: slow dynamics
The dry season corresponds to low outflows into the lagoon and the rainy season corresponds to high outflows into the lagoon. By taking this into account, observations relating to FDOM source tracking and dynamics, and also complexing abilities as regards heavy metal trace elements, can be repositioned in line with typical annual seasonal variations.

• tides: rapid dynamics
Tidal influence will be appraised through hourly sampling over 12 or 24 hours at an upstream mangrove station and a downstream mangrove station for each transect (Mounier et al, 2018). Comparison of findings from these series of timed samples will enable day-night effects to be separated from tide-related effects.

The TREMOR project sampling plan will require analysis of around 120 samples, including fifteen samples representative of habitats passed through, which will be used for heavy metal trace element complexation experiments.

Experiments testing the potential of spectrofluorimetric analysis in the identification of FDOM constituents have already been carried out:

•    in January 2018 in the Koné lagoon during a one-month assignment carried out by MIO aboard the vessel ALIS, as part of the UECOCOT project (monitoring cross-reef exchanges between lagoon and ocean at barrier reef breaks);
•    in March 2018 on sediments in the Koné lagoon sampled as part of the DYNAMINE project.
•    in July 2018, when Stéphane Mounier arrived for spectrofluorimetry training, an assignment targeting the same sites was carried out, concluding the series of analyses. These initial analyses were later supplemented by analyses carried out between March and June 2018 on samples collected along Coco and Témala river transects as part of Laura Boher’s  and as part of Marie Bessard’s Master 2 fieldwork course.
•    In July 2019 on the 2  Coco and Temala mangroves points with a 24h automatic sampler during a CRESICA mission of Stephane Mounier (48 samples)
•    The last mission will be in March 2020 during a CRESICA mission by Stephane Mounier in Coco and Temala rivers.

The process of interpreting findings from all these campaigns is underway. Works were presented at international symposiums WOMS 2018 in Toulon) and next at EGU 2020 in Vienna, Austria).

Tuesday 18 September was dedicated to the intermediate results of the "Au fil de l'eau" program (whose presentation is available on the french's page of the project). This restitution day was an opportunity to exchange on the various projects that make up the program, between research professionals, actors from the public, private and associative sectors working on these themes.

With the support financial partners