In New Caledonia, water governance is overseen by a specific institutional organisation endowed with a regulatory framework which is incomplete and sometimes out of step with local customs and practices. 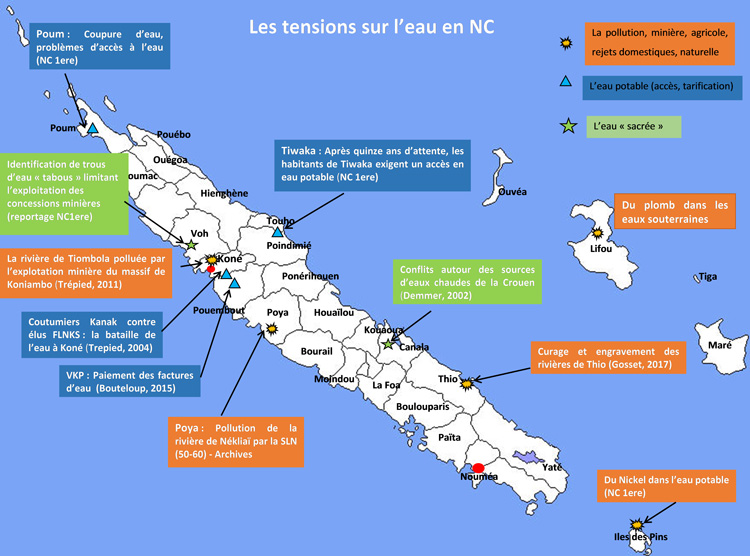 The institutional organisation varies depending on the land tenure status, customary land being excluded from the New Caledonia public waterways domain, in accordance with Article 44 of the 1999 Organic Law, as amended in 2009.

Tensions on customary land therefore arise in respect of “sacred” water, pollution, particularly from mining, and pricing and access to drinking water.
Several studies in New Caledonia have focused on improving knowledge of freshwater resources, in terms of both quantity and quality, but little research has been done on water-related know-how and customs or methods of water resource governance.

Thus, the aim of the GOUTTE project is to:

•    Gain an understanding of representations or protests linked to water in customary land, rooted in the bond between water and mankind, land, language and culture and the sacred;
•    Analyse the development of values, knowledge and customs relating to water on customary land in New Caledonia;
•    Analyse regulatory and legal frameworks, aiming to put divergences between international law and local practice into perspective;
•    Look at innovative rules of management and methods of governance, developed in collaboration with local stakeholders and based on representations, values and traditional uses, adopting an approach of integrated management of water resources throughout New Caledonia.

Building on a Pacific Fund project
The Goutte project has been developed to build on a Pacific Fund project undertaken between 2014 and 2016 and entitled “Fresh water supply and the land-water nexus in the Pacific: competing uses, complex regulations, conflictive political issues”.
This project was led by the Australian National University (ANU) and involved New Caledonia (IAC in association with the North Province), the Kiribati Islands, the Solomon Islands and Tonga.

The ANU project focused on water-related collaborative issues and aimed to
•    Promote “water-social science” research collaboration and networks in the Pacific;
•    Identify research themes with promising and inclusive reach and appeal throughout the Pacific.

The issue of water governance on customary land emerged as a key topic both for researchers and communities involved in the project (Bouard et al, 2017; Daniell et al, 2016; Bouteloup, 2015; Lejars et al, 2016).

2017, launch of exploratory research
In the wake of this initial project, IAC, CIRAD and IRD launched an exploratory study in 2017, focusing on the topic and funded by the Montpellier Institute of Water and the Environment (IM2E) in New Caledonia (Nekiriai, 2017; Lejars et al, 2017) in association with researchers from the “Eau-SHS” network set in place by the Pacific Fund project.

Indigenous peoples' rights of access to water - an issue frequently discussed in existing literature
The issue of water governance on customary land occupies a whole field of the existing literature on “indigenous peoples’ rights” of access to water, which often highlights the interconnections between political, land and environmental claims and water resource ownership claims made by indigenous peoples (see for example: Hidalgo et al, 2017; Boelens and Seeman 2016 as regards South America; Tripod, Trepied, 2011 & Trepied, 2004 as regards New Caledonia).

A topic also addressed in the Pacific Region
In New Zealand; the sacred and symbolic nature of water is reflected in practical terms in innovative methods of water resource management (Jackson and Altman, 2009; Hsiao, 2012).
In the Pacific Region, while issues relating to water on customary lands have been identified, there has been little research focussing on the central issue at stake (Daniell et al, 2016).

Against this background, New Caledonia can serve as a model for the development of innovative modes of water governance which factor in local knowledge and practices (Bouard et al, 2017; Lejars et al, 2017). 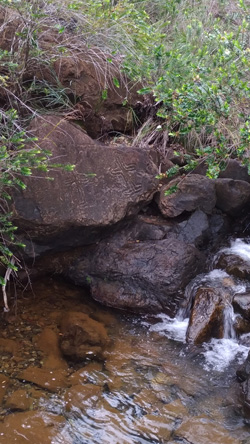 The project is therefore structured around 5 major work packages spread over 3 years, with specific         contributors assigned to each package.
To ensure that diversity of practices, knowledge and languages is taken into account, research work will mainly be conducted in three common land areas: ideally, the North Province, the South Province and the Loyalty Islands Province.

The GOUTTE project aims to:

Improve knowledge of water-related know-how and practices on customary land, including perception of risks associated with water shortage or flooding;
Facilitate awareness raising and the sharing of new practices and management rules, including water saving and water pricing issues;
Support consolidation of the legal framework regulating water and aquatic environments, with a view to adapting it to reflect the legal fragmentation of rivers and groundwater;
Clarify the social feasibility of introducing new
•    hydraulic structures (e.g. dams)
•    Systems for:
o    management and sharing of water (e.g. river contracts)
o    water pricing

At New Caledonia level
The GOUTTE project should help to consolidate and broaden existing partnerships, by
•    setting up local workshops
•    joint training of a civic service volunteer (VSC)
•    joint work by researchers on common lands
•    Involving researchers from other disciplines and institutions like the ADCK and IANCP.

Moreover, the project will be carried out, wherever possible, in interaction with other research projects led by CRESICA, for the purposes of which knowledge of water-related practices and know-how could serve as complementary or supporting factors.

At community level
The GOUTTE project will be carried out in coordination with research on water policy in New Caledonia led by MISE. Debates and discussions on program progress and findings will be scheduled in conjunction with the DGRAC/DAVAR/START, the Customary Senate/North Province/South Province/Loyalty Islands Province.

At Pacific Region level
Funding from bodies such as the Pacific Fund or IM2E could strengthen existing collaborations, particularly with the ANU in Australia, with Vanuatu, Tonga and the Kiribati Islands.

Each social science discipline will use its own methodological tools, such as
•    Direct or participant observation
•    Historic data from analysis of public and/or private archives
•    Conducting open and semi-structured interviews
•    Survey analysis, regulatory frameworks
•    Studies, spatial data
•    Children's drawings...

•    Listening to elders talking about the changes they have observed and experienced
•    Asking young people about their knowledge, practices and representations/protests and contrasting them with those of older generations

Given the diverse range of disciplines and methodologies, the GOUTTE project plans to make common and shared lands are central focus for research work. The choice of lands, still to be defined, will be designed to ensure that case studies in the North Province, South Province and Loyalty Islands Province are covered.

Having researchers work on common lands will promote

Work groups and project monitoring involving the DGRAC and community water services will also be put in place.
Finally, depending on available resources, an international seminar addressing the issue of water on customary lands could be scheduled.

Tuesday 18 September was dedicated to the intermediate results of the "Au fil de l'eau" program (whose presentation is available on the french's page of the project). This restitution day was an opportunity to exchange on the various projects that make up the program, between research professionals, actors from the public, private and associative sectors working on these themes.

With the support financial partners